It’s that time of the year again.

Did you know that corporations everywhere love LGBTQ+ people? Can’t you tell? They have the rainbow logo and everything.

… Just not for their location-specific social media accounts in Saudi Arabia or Russia.

“We believe #Pride is more than a moment or a single event. We strive to be a champion of #LGBTQVisibility year-round, using our voice to drive acceptance, inclusion and a love for humanity.” – Procter & Gamble (General Twitter account pinned tweet).

With their Pride flag displayed proudly on their banner, this pinned tweet is a bold statement of support and solidarity.

Until you notice the radio silence on their Saudi Arabia account, with not a Pride banner or pinned tweet in sight.

You know, because Pride is more than a single event, isn’t it? 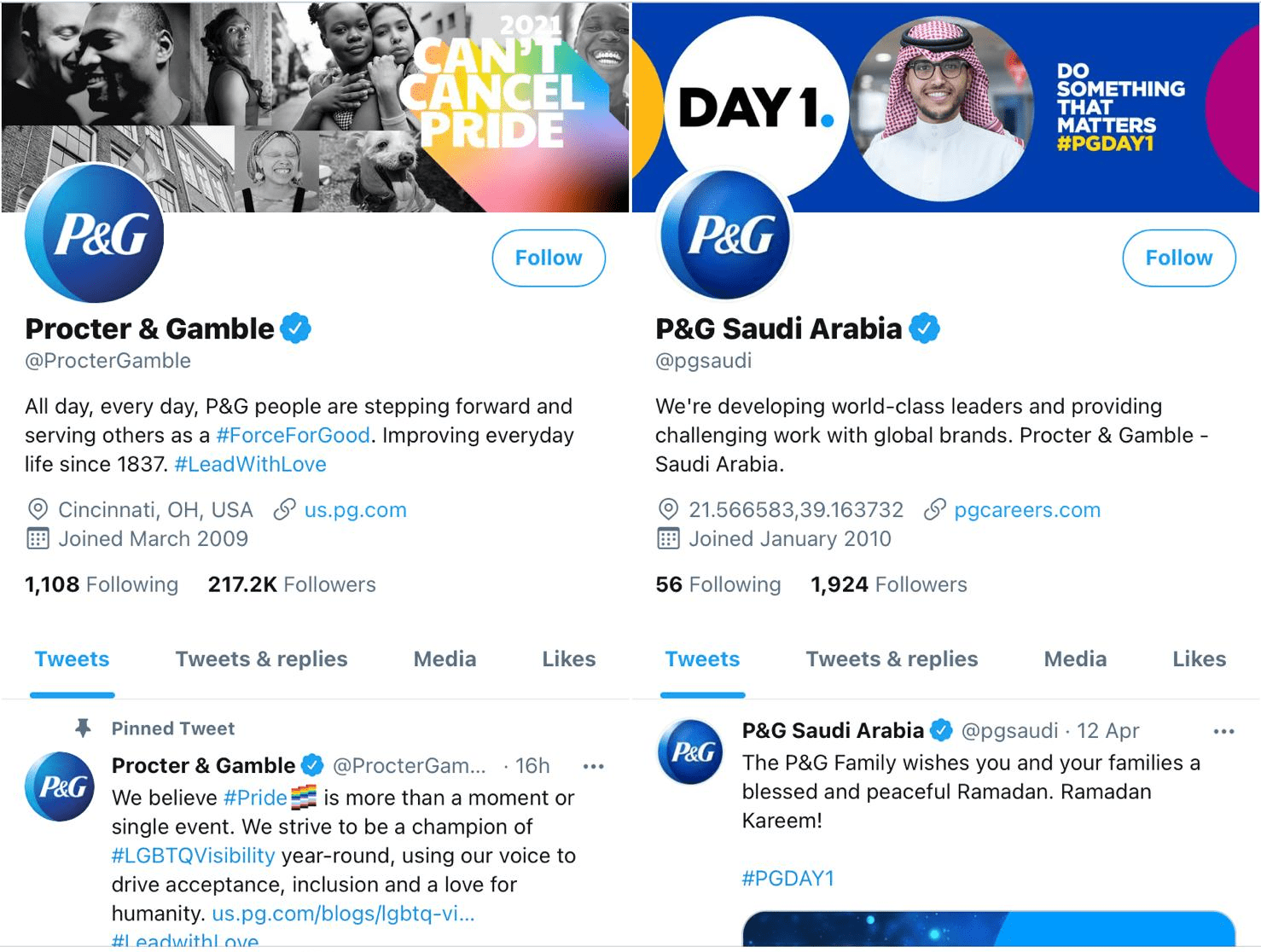 The thing about social topics is that it becomes immediately transparent which brands will change their logo and pin a tweet for a month, before going back to business as usual.

These are companies that are more than happy to take the money of LGBTQ+ people, benefit from the millions raked in through performative activism, only to not give a shit where it counts.

The argument is often made that there needs to be cultural sensitivity from companies.

After all, the persecution, discrimination and violence against gay people in non-western democracies isn’t our problem, is it? 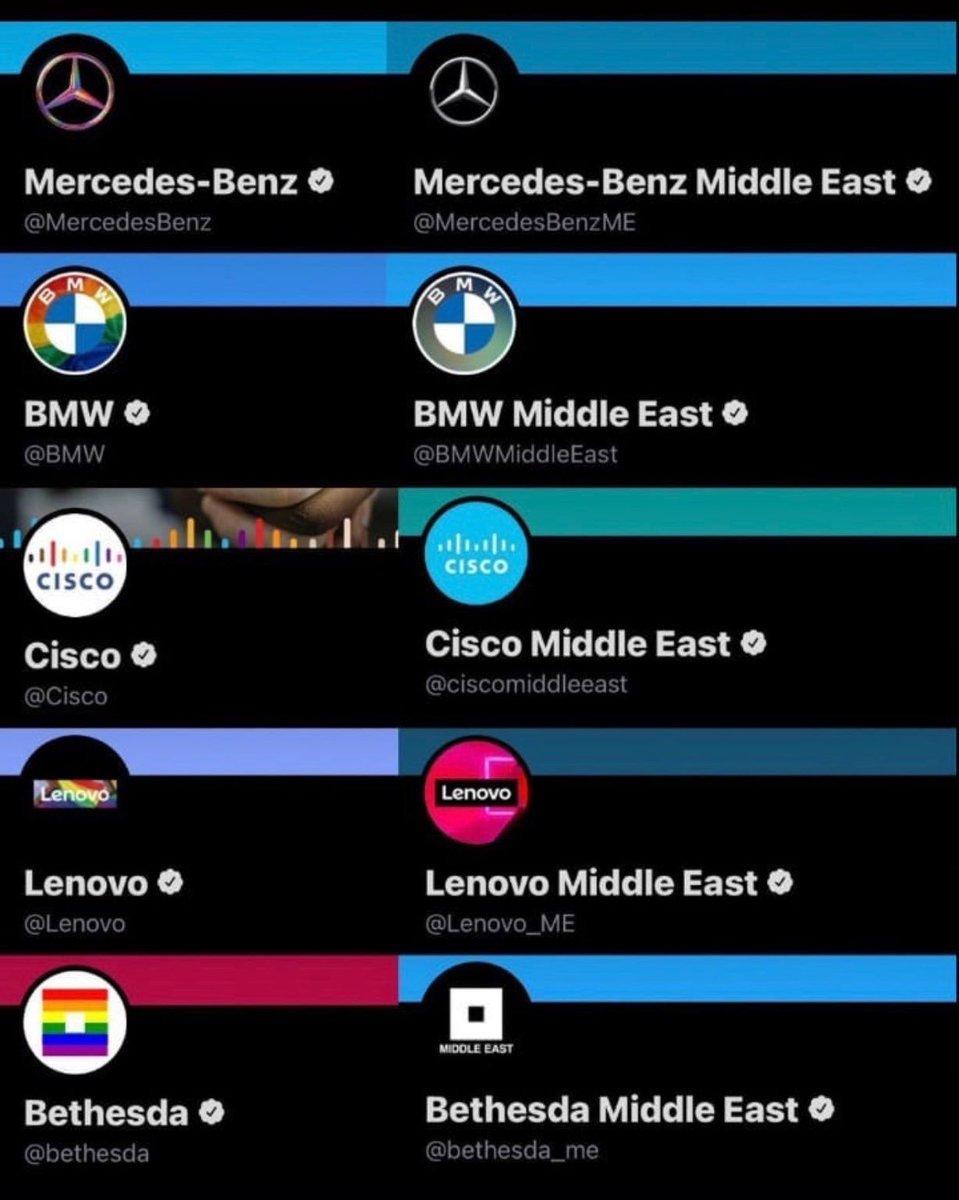 Thank God that YouTube cares enough to stop enabling predators (or those who film dead bodies) in time to plaster a rainbow flag where they’re unlikely to receive backlash.

That gay money is just too good to give up

When is activism performative? 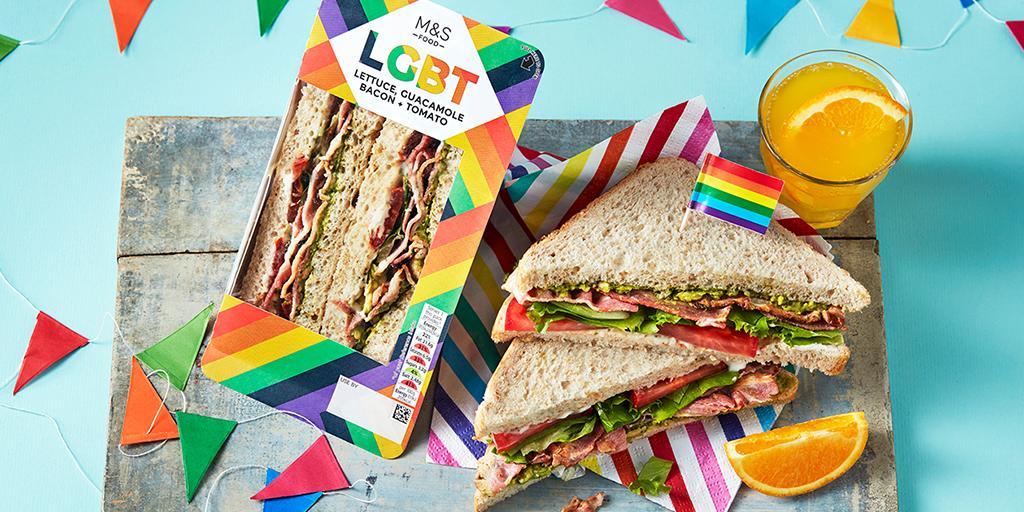 When activism is commercialised, it becomes a commodity.

It’s extremely easy to add a rainbow logo and banner to your social media accounts, but those in the LGBTQ+ community can taste the disingenuousness immediately.

The history of Pride is completely lost under the tide of companies patting themselves on the back for the bare minimum.

Whether it’s Listerine’s gay mouthwash (with the random ‘somewhat related to the meanings behind the original rainbow flag colours’ words), or Marks and Spencer’s gay sandwich (lettuce, guacamole, bacon and tomato…you know, LGBT?), businesses never seem to get it right. 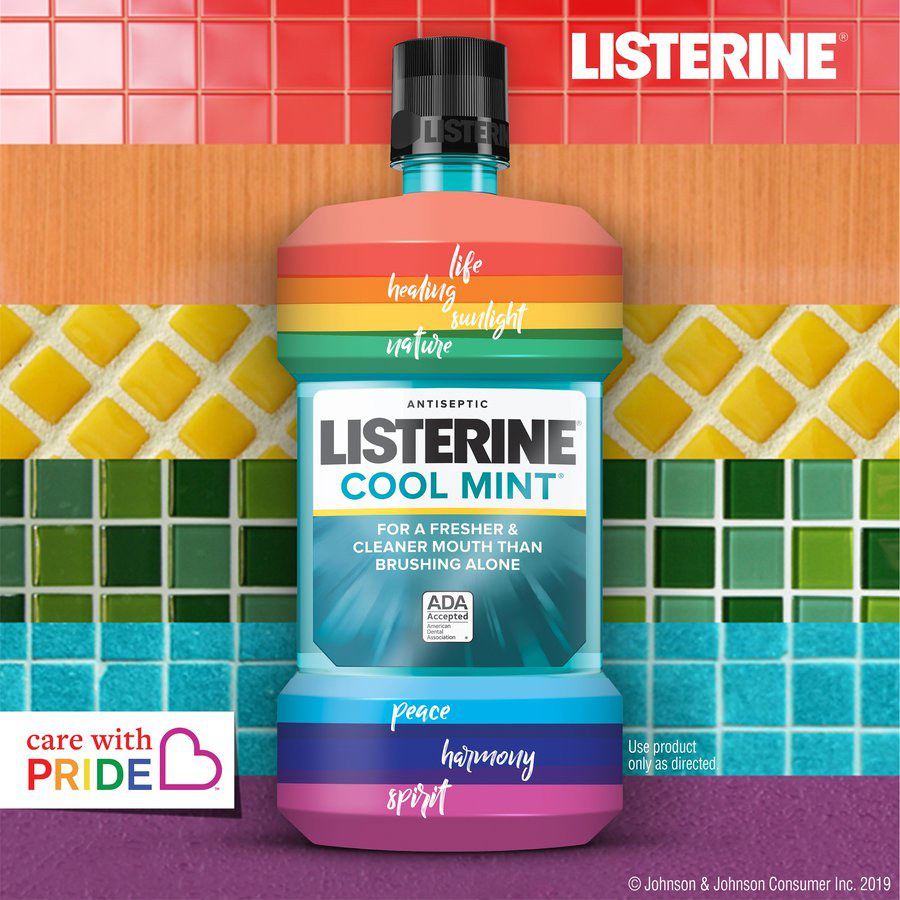 Whilst Listerine were busy facing jokes about how gay mouthwash benefitted the community on Twitter, their parent company Johnson & Johnson’s Care with Pride program continued operating, which has given over $1 million to LGBTQ+ nonprofits since 2011.

Not be a total Karl Marx about it, but profit is generally placed ahead of genuine change.

Often, these campaigns and actions are about as genuine as a politician’s apology, as they are obvious attempts to cash in on people’s idealism to deflect from their own lack of progressive action.

It’s nice that BMW cares about gay people (outside of Saudi Arabia), which we can be more grateful for than #Dieselgate.

Who cares about Lenovo allowing Superfish ‘adware’ back in 2015 to poke a hole in Lenovo laptop users’ security when they’re slapping a rainbow logo on their socials and calling it a day?

If they bring public attention to an issue, does the motive matter?

1% of proceeds going to an LGBTQ+ charity isn’t allyship, it’s about profit from the community you’re exploiting.

The main question many of these businesses are asking themselves is “how can this benefit me?”, as there are no genuine attempts at change in their business.

Does your business have a culture that is diverse and inclusive? Does it care about LGBTQ+ issues and initiatives all year round? Do your LGBTQ+ employees feel safe, valued and as though they can be themselves at work?

I’m sure the 35% of LGBTQ+ workers who have disguised their sexuality in the workplace will really feel change is on the horizon now that YouTube has a rainbow banner.

Perhaps the 1 in 5 LGBTQ+ staff who have been the target of negative comments at work because they are LGBTQ+ will be over the moon that they have their own Marks & Spencer sandwich.

Do you really care?

Many businesses have left their logo intact during Pride month. Many of which are strong allies and advocates all year round that don’t need to shout, “We love the gays!” whilst also refusing to advocate for the community in countries where the LGBTQ+ community needs help, now more than ever.

Whilst Marks & Spencer may have donated £20,000 to akt (a British LGBTQ+ youth homelessness nonprofit), the method for gaining attention seems to overshadow the outcome.

So many of these businesses are busy plastering social media with rainbows and vague statements, without any commitment to the community at large, or the LGBTQ+ employees they have.

Pride is the opposition to shame and stigma.

There is no pride in performative activism, nor is there an acknowledgement of what Pride is and what it means to LGBTQ+ people. 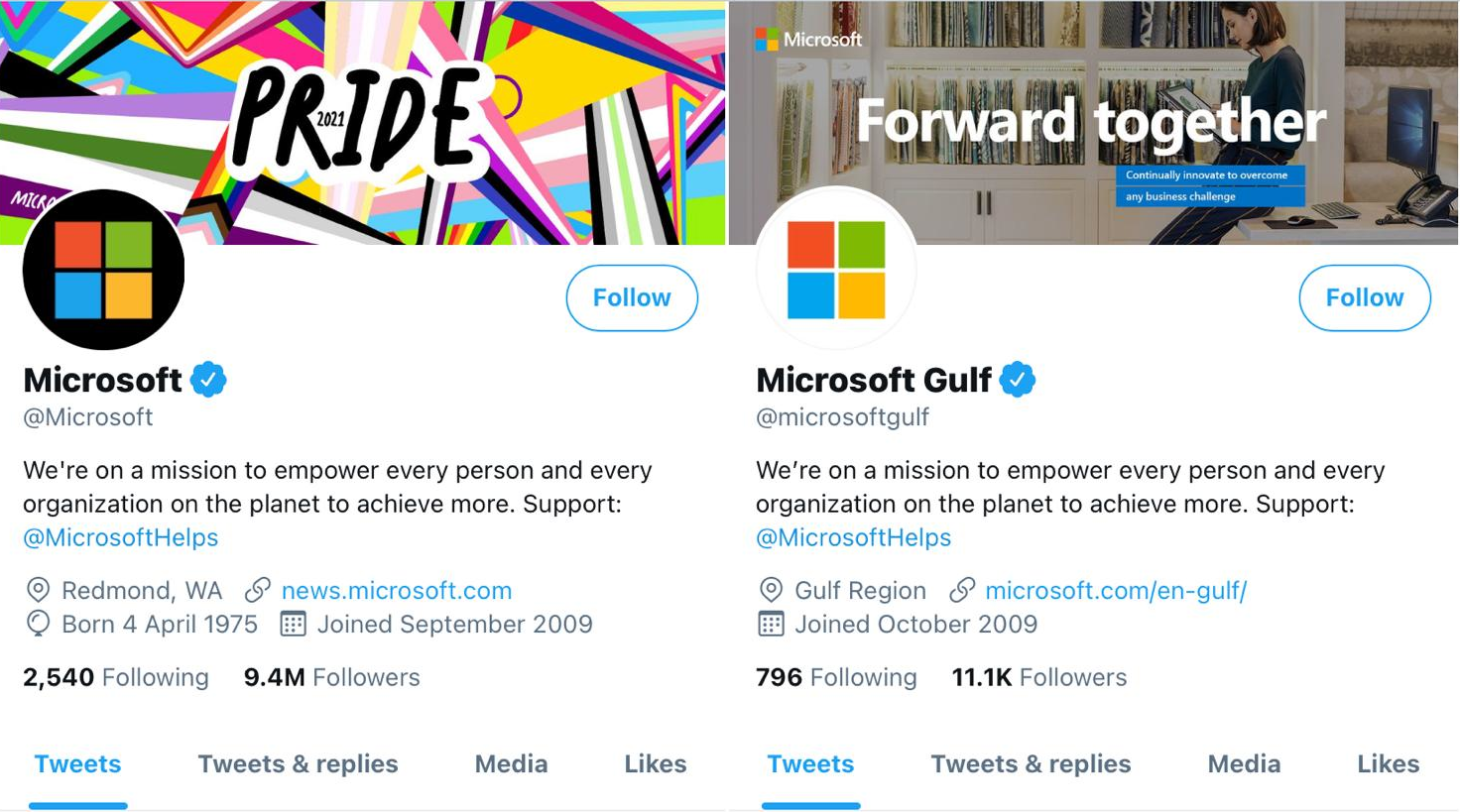 It isn’t rainbow merchandise or logos, it’s about empowering a community that has been shamed, raising awareness of the issues that they face, and commemorating those who marched when it was life-threatening to.

The trajectory of LGBTQ+ activism and rights changed with events like Stonewall, policies such as Section 28, and the impact of history such as the Aids crisis, and widely-publicised hate crimes against the community.

Pride is a commemoration of this, not a cash grab from the community that needs a platform for change.

If you genuinely put people first, profit will follow.

For the love of God, though, please don’t put out another fucking gay sandwich!